last night i was on a website that writes reviews of obscure retro games, and i decided to poke at it's archives to see if i could find a game that's been itching away at me. it was a golf game i remember playing from a vaguely Christmas-themed shareware CD I spent a lot of time with as a kid. to my surprise, i found it. The Greens, with a course named Scylla and Charybdis (a name that was always evocative, but a reference that completely flew over my head) and a nice pock sound as balls bounced off the walls and into holes. 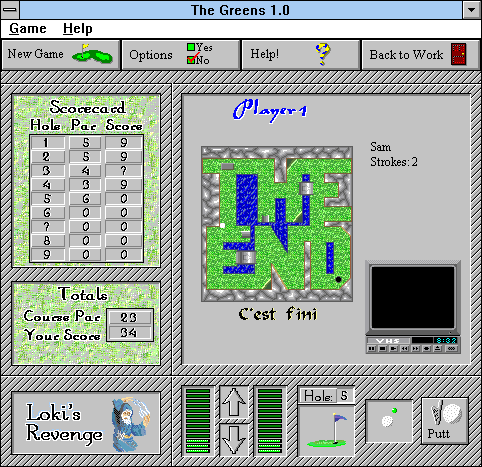 it's a cosy little game, that looks good windowed. the courses are tiny, so small that you never need to power your swing up to it's fullest. they're dinky little putting greens, with lava hazards. there's obviously a lot of specific detail that had fallen out of my head in the intervening 15 years, and one thing i had forgotten was how Windows 3.1 it looked. nowadays, the fact of all those buttons, all those fiddly little details, that stands out. but i guess back then it was just normal, just how software came.

there is something delighful about the way it's framed. it's a game built into the standard Windows UI, the same way that Castle of the Winds was (Castle of the Winds was originally made as a way for the developer, Rich Saada, to get practice with Windows APIs). every control is in it's own panel, the way the green glows against the omnipresent default gray, the chunkiness and physicality of the pre-skeuomorphic buttons and insets. there's a wizard in the corner. it's cute and precise and charming, a feeling that's rare for software today.

but more than that, it speaks to something about that shareware CD. i feel like it taught me a set of values I internalised, took as normal, and now fight for in my work. the CD was a random collection of themes and games and screensavers and utility software, if memory serves only partially Christmas themed. you got the sense they filled up the disc like 70% full with Christmas stuff, then just added some extra stuff to make up the numbers. i'm sure there were categories on the disc itself, but this disc (all of these discs) never felt like it was just about games, or about screensavers or whatever. all of these categories of software mingled, and stuff could comfortably sit between. you got the sense that a single developer could dabble in any of this stuff.

The Greens speaks to that. i wouldn't call it a videogame. computer game is probably most accurate. but really, it's just software, one of hundreds of software applications that came on this disc.

what does software look like? it's gray, with rectangular buttons like flattened pyramids.
where does it come from? it accretes on CDs, it's passed around on floppies, it's downloaded over slow minutes of modem hum
what does it do? it lets you play golf