Here's a quote from Holly at Hide and Seek :

Punch the Custard is a game in which two players compete to punch custard. The player who punches the custard the most quickly and accurately - as judged by the computer, which keeps count - is the winner. Successful players might not even get messy hands - because if you punch custard just right, it behaves really weirdly, and bounces your hand back as if it were a hard surface.

It's a great game: fast-paced and funny, and so incredibly straightforward to play that all the strange development work behind it disappears into the background, almost unnoticeable. (How many games involve electronics, programming and experimenting with the viscosity of edible fluids?) It leaves you out of breath with aching arms - and surrounded by spectators who want to have a go. And maybe covered with custard, but there are some sacrifices that are worth making. 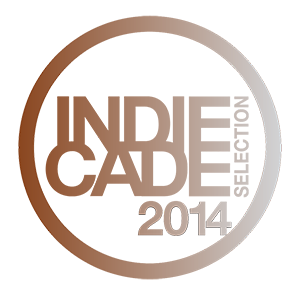 Here's the feedback I got from Indiecade:

The game portion of Punch the Custard isn't going to set the world alight. At heart, it's a physical contest, not unlike a field sport like high jump or shot put - the sole determination of victory and defeat is your own physical capabilities and that of your competitor. You know exactly how well you're doing at all times, and the only strategy is to do more of what you're doing, quicker than your competitor, without lactic acid overtaking you in the final stretch.

Punch the Custard is beautiful, though - its about the inventiveness of finding play in unexpected places, the physical properties of materials, and the absurdity of games in the abstract. Mostly it's virtue is in its massive over-engineering of something very simple. Do you take it seriously, and overindulge the act of competitively punching a bowl of dessert? Or do you treat it as frivolous, and ignore the fact that someone has hooked up a control system to a bowl of non-Newtonian fluid?

It's a complexity of design and concept that has been executed in such a way that it brings out the clarity and purity of physical competition. It's a very fine balance and it's worth respecting, whichever way you fall on the broader philosophical questions.

A lot of people are laughing as they play this game, which is a good sign. Mucky, rapid-fire, custard-slapping fun. The screen display is fairly retro, which suits an arcade feel, and I wonder how it would feel if more happened visually to support the game aesthetics and/or "kitchen" narrative - I'm sure the designer is fully aware of the options there if they did choose to develop that element further. Great to see such an unusual and organic game controller!