Tonight I played Pierrec’s game Sister’s Little Helper as a bedtime story. I wanted something calm to relax me before going to bed. I was tired, and knew it was time to sleep, but I’ve been staying up too late recently, so I wanted to waste a bit more time.

It fulfilled that role excellently – it’s a really charming little game. Every night, a young girl rolls herself a joint and tells herself a story before going to bed. My favorite story was all the ones about The Story That Can Only Be Told Once. It’s maybe not a game (not that I care), but a way to tell those stories, and more importantly, tell the story of the girl. It’s not about you, I guess I’m saying. 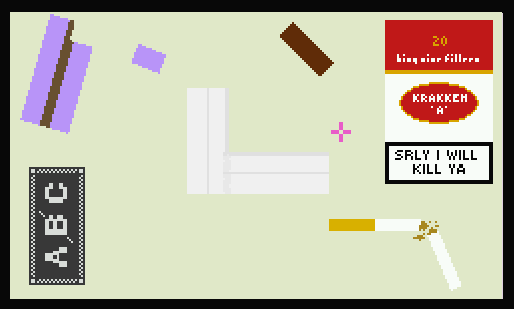 Here’s an interesting part to it – there’s a joint rolling simulation in the game. You’re rolling the joint that she smokes. Now, I occasionally smoke, and even more occasionally roll joints. So there’s a lot of familiar details – the details on the rizla packet, rolling up little roaches from card. But it’s also a confusing alien experience. It’s been many years since I’ve smoked hash – is that common in France? and I very rarely get fancy with multiple rizlas. And I remember my flatmate decrying rolling up with fag tobacco just the other night. So all these things feel like someone else’s rolling experience. Not mine, but hers. The French girl who should ring her parents, not the British guy avoiding sleep. Which feels completely right.