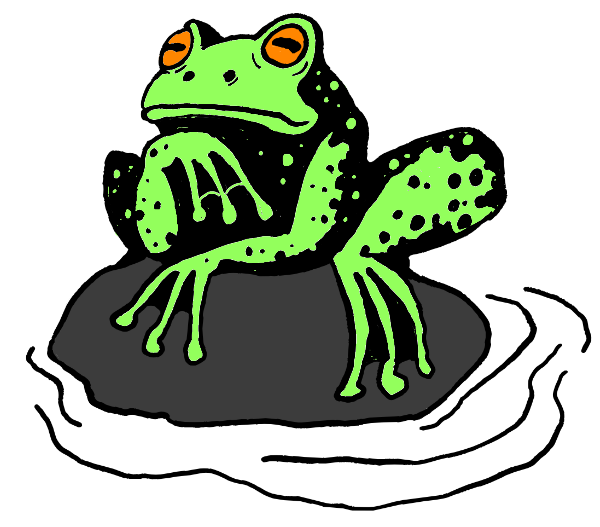 Together with Viviane Schwarz, I am releasing a new social network for frogs. It’s called Frog Chorus, and it’s a place where all you can do is ribbit.

The initial seed of the idea and the illustrations came from Viv, and the coding & the rest of the design were done by me.

The site is a social network for frogs. Open it, and you will see yourself sitting as a frog in a pond. You can click to ribbit, and you can hold down to do a really big ribbit. And you can see and hear other frogs ribbiting in the same pond. It’s the smallest satisfying online social space that I can imagine.

The last few years have been difficult, for reasons that I am sure will be familiar to many of you. Alongside the typical sense of isolation brought on by Covid precautions, I developed chronic fatigue, and have had to be very careful about my energy expenditure. This has meant I have spent a lot of time online—even more so than I usually do. And—there are a lot of opinions online. There’s a lot of things people share, a lot of Takes, a lot of Content. This is, on the whole, a good thing. But sometimes, when you’re tired and overwhelmed but also you still have this real thirst for connection… you want a way that you can be in the presence of people but also not have to say anything. You want to just be able to ribbit, and maybe recieve a ribbit in response. Or to leave a pond open in a tab, occasionally hear a frog plop in or ribbit, and know that someone else is around.

So that’s the motivation behind the project. Why is it built the way it is?

I hope you have fun being a frog too.

And a quick technical rundown, for those of you who are interested: