So I have made some incremental progress, in between all the ignoring this project I've been busy with.

Where were we last? I confess I have no idea, as I am typing this offline for later pasting up. Note to self: go to the pub, alone, with a laptop and no internet connection - you'll get hella shit done.

So recently I have made a proper helmet for all my electronics junk to fit within. I spraypainted the visor black (though it's coming off worryingly easily when it gets scraped), I put headphones in the ear protectors ( although they're a little too nice for such a role, and the left is in the right, and vice versa. thus leading to this), and I put all the wiring duct taped to the top inside of the helmet. I taped the vibration motors in place, and - voila - a lack of sensation on the sides. Evidently my head is the wrong shape. After much fannying, I gave up and went home. 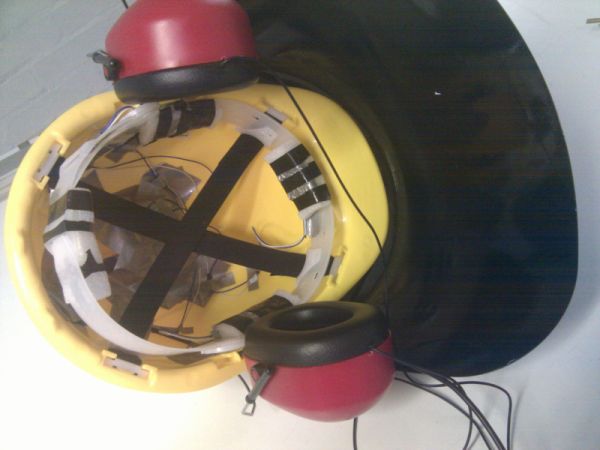 Many days later, I returned, and did the obvious thing - push the motors out with padding. This also helps cushion the helmet itself from the vibrations, which is a good thing. Still, you can hear more than feel the motors. I don't really have a solution, but it's a pain. Not Ideal. The helmet is also a little uncomfortable after a while, but no more so than some uncomfortable earphones. Ergonomics matters, kids! Still, it's functional, and can now be offered to people without fear and worry on their part. (It's still outlandish, don't worry - but it doesn't look like it'll electrocute you anymore.)

To make the helmet more diegetic (fuck, that Nordic Larp book is worming into my brain), I need to spreaypaint it like a knight's helmet. KNIGHTMARE, indeed (never saw that as a kid, but that's what people say to me). Silver spray should do it?

Anyway, platform is nearing final shape, and is at least good enough to go on with. I'ma offer it out as a gaming platform for people at the jam - be nice to see if someone can think of something cool for it. Cooler, and quicker than this long-ass project. :<

Software side, software side, I made some lovely progress last night. Testing at the hackspace produced a cry of "I don't know what the fuck is happening", and while I can reliably get to the other end, I must admit to being lost, pulling on a thread doing it. Takes too much commitment to a dull bad place to get through - no reward. Too little feedback does not a joyful experience make. This could be maybe transformed with lore, and I'll make that do some heavy work, but lore is not a place I am experienced with, so I will slap on everything else I can to make this stupid concept* work.

To that end, last night I pimped up the sound most splendidly. The issue people were having was a lack of a sense of location. Sure, there's the siren giving you one thread to follow, but that's not enough to position you, just to drag you through. So I have added a deep roar at the entrance, a hidden source of wind deeper in, and ever so many drips and echoey areas to navigate through. As well, I've been further simplifying the level down, it's harder to get lost, and there's fewer obstacles to avoid. Possibly too far, but everything is easy enough to drag around to modify if it comes to that. And "too accessible" isn't a problem I currently suffer from.

I've also just now reworked my trigger-using scripts, and they appear a little more comprehensible this time. I did just rewrite this code out of laziness and disgust at the thought of understanding the stuff I wrote before, but I think it counts as a win. The Gorgons now no longer use UnitySteer, they just naively march towards you. But that's basically all I had got them doing before, and they're a lot more comprehensible now, so again, an uneasy win. They also only start chasing you once you stumble into their trigger area. With a sufficiently light density, you shouldn't end up with too many chasing you. I'm hesitant to develop the Gorgons too much until I'm happy navigation is possible.

What next? Work on the whole "make it more comprehensible". Polish and feedback. Working out a script to play at the start, and at the end - to make the plot comprehensible. Adding footsteps - the biggest necessity for making movement comprehensible. Once you can move and feel okay, once the game is boring, then we can add some shit to shoot! And then make that shit comprehensible. After that? Die of old age, I guess.

(*what concept? just "an FPS type game you can play with your eyes shut" or with tactile/audio only feedback, I guess.)

I want to make this a comprehensible game. I know a few developers (*cough* increpare) who are happy making interesting, incomprehensible pieces. That's cool, the struggle for meaning is something I get off on. And maybe there's the old effect where game makers make games too hard due to their own practice - Increpare perhaps makes the meaning too inaccessible, because he knows it. Partly, I like games that everyone can play - I don't want to appeal to a niche. And also - this is an experiemnt in one direction, and not one I am confident of. If I have to mix my medicine with sugar to make it go down, then I'll make the sugar as sweet as possible. I wish I made more things, so each could be flimsier.