Apple is a type of food that restores 4 Hunger Points. 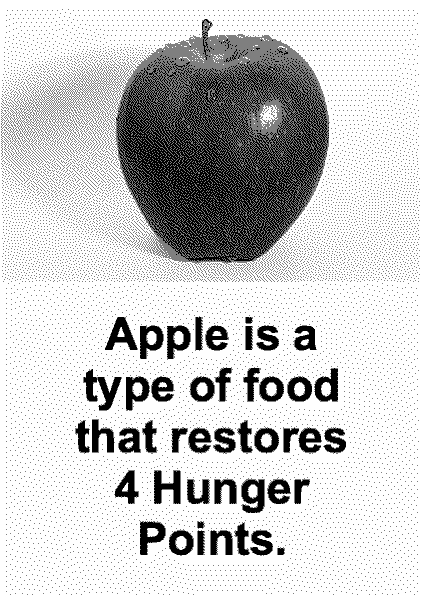 I have been excitedly following the progress of Electric Zine Maker, by Nathalie Lawhead. It’s a goofy, idiosyncratic software application that helps you make 8 page foldable zines. It has a potato tell you how things work. I wanted to try it out.

A few months ago, I was looking through a fan-wiki for some show or another, and I came across the entry for “Apple”. It earnestly explained that an apple was a type of fruit, descibed an apple’s typical appearance, and that various people had eaten one or mentioned one at various times and I was just really struck it. The care that had went into this entry, the seriousness with which the editors had approached an absurd task. What is an apple? Describe it in a single sentence for people who definitely know what one is already. It’s important.

I was so struck by this, I decided to see what other wikis had written for “apple”. And pretty soon I found myself systematically collecting the first sentence* for all the entries for “apple” in all the wikia.com wikis. This took a little while. But I now have a text file with 190 lines, each describing the place of “apple” within a fandom.

But I didn’t really have a purpose for this text file, besides the feeling of having an interesting text file (underrated feeling, imo). So last night I decided to make a zine, to test out my corpus and to test out this exciting new creative zine-making tool. I asked my computer to pick 7 entries at random, and I combined them with some stock images (because they have a very similar vibe, I think) and some built in grunge-ifying filters (because this is a zine, after all).

And here it is, “Apple is a type of food that restores 4 Hunger Points.”:

Supplementary info, if you’re printing this out yourself:

(* or the sentence that descibed an apple, or very occasionally I did some light editing to make it fit with the rest of the corpus. This is the magic of collecting things by hand for artistic purposes - you can just make some judgement calls as you go.)